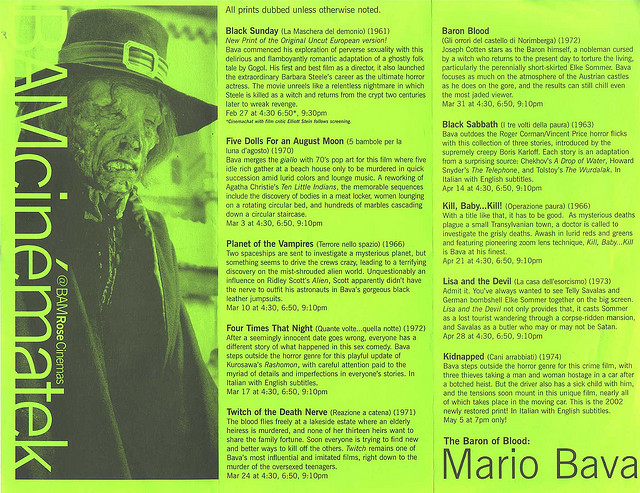 The bavatuesdays Bava Film Fest is ten-week series that will be airing live every Tuesday from April 2nd through June 4th at 2:30 PM EDT (though times may be subject to change). The live episodes will focus on one film by Mario Bava for that week.  All but two of these films are available on Netflix, and for those without Netflix—I’m currently working on other ways of sharing these films.

Here’s the schedule, all of which will feature a live, one hour video episode to analyze the film of that week. I’ll also see if I can’t bring in other people to discuss the work (I hope Paul Bond proves to be a regular). I invite anyone interested to play along (let me know in the comments below), but I’d like to think of this more like a distributed, asynchronous film festival than a course—-especially given my love affair with Mario Bava was sealed by just such an event at the Brooklyn Academy of Music’s Rose Cinema in 2001, or was it 2002? You can see the schedule from that festival above, which is the fruit of an archival post from long ago.